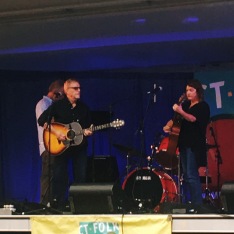 The best time I’ve had in the rain was at the Connecticut Folk Festival this past Saturday, at Edgerton Park.

I was there 50% to see The Alternate Routes (who coheadlined with Nick Fradiani on tour last fall), 40% to enjoy the local indie folk scene, and 10% in hope of good snacks. All my goals were satisfied.

I arrived — and quickly obtained a beer, because I have well-defined life priorities — midway through the set of Open Book, the Hudson Valley duo of Michele and Rick Gedney. (Had I been thinking, I would have shown up earlier to hear the Grassy Hill Songwriting Competition, but I spent the morning scraping veneer from a “found” end table in a dignity-of-manual-labor and authenticity-of-handicrafts way.) I was so entirely flummoxed by everything that I carefully held my phone steady for an entire song that I really liked — “Second Chance,” which feels like a 25-years-later response to Belly’s “Feed the Tree” — only to discover I’d had it set to photo rather than video the entire time. Go listen to it on Spotify — I’ll wait.

For live video from the event, we’ll have to make do with Open Book’s moody, ethereal cover of The Beatles’ “The Night Before.” (I think the toddler dashing by, halfway through, is the one I later attempted to convince she didn’t want a career in radio.) Both songs can be found on the album Grateful (Spotify, Apple Music, Google Play).

There was then a long gap to the next band — my schedule-reading skill is right up there with my calendar-reading skill — so I wandered off and encountered the best kettle corn on the planet. I’m not kidding. I love kettle corn, I buy kettle corn compulsively at festivals… and this is the finest kettle corn ever. Sweet and salty, hot and crispy, melts in your mouth. Elm City Kettle Corn. Remember the name. Eat the kettle corn.

Since kettle corn alone didn’t seem like a healthful lunch — okay, my relationship with the kettle corn was rapidly becoming embarrassing — I went in search of protein and found… LOBSTAH!

Replete, I was ready to squat in the mud for Goodnight Blue Moon, a Connecticut septet. “Dust” is a literal hand-clapper — I was inadequately alert (or excessively butter-coated) and missed the first 2/3 of it, but it segues so neatly into “Undertow” that you’re not really suffering to get the two together. “Undertow” is on their 2018 album, Dawning Dream (Spotify, Apple Music, Google Play). If you like your indie folk with roots rock overtones, you want this album.

The rain came down harder. Since the amplification was good enough that I could hear the band clearly without squatting in the mud in front of them, I wandered in the vague direction of possible shelter and, sheeplike, followed the herd into… a conservatory, A conservatory that was so straight out of a 1920s novel that I expected Lord Peter Wimsey to pop out from behind the chocolate tree (yes, there’s a chocolate tree), screw in his monocle, and announce that Lady Mary could not possibly have left the footprints behind the aspidistra.

It turns out that Edgerton Park looks like an 18th century English estate because that’s how magnate Frederick F. Brewster wanted his semi-rural getaway to look, circa 1909. (While it’s only two miles from downtown, it’s on the edge of darkest Hamden.) There’s a community garden behind it, which I wandered in the rain with the idiotically delighted expression habitual to Bertie Wooster, though he probably wasn’t so excited about flowers. Then I went and ate Ben & Jerry’s ice cream in the rain, there being few more New England-y things to do that don’t involve actual whales.

Oh, and I bought 12 gently used random CDs for $20, as one does, choosing this stack because of the one titled Ordinary Cats. Utterly random things should be embraced. The seller tried to interest me in a second pack with more feminist themes, leaving me wondering if my favorite Nick Fradiani “eagle” T-shirt (you know, the one I wear on all occasions except to Nick’s shows) reads as the seal and emblem of a small liberal arts college or if I just look that earnest.

So I went back and found a nice spot under a tree where I could sit… well, sort of lie down… in only moderate mud. The next act up came with a confusing story about how many band members were involved — you have to remember, all of these bands have incredible resumes of New England music award this and songwriting award that, so it’s both terrifying and difficult to keep straight — and then suddenly he’s singing a song I recognize. And it’s not because it’s a cover. It’s because I actually know the song. It was the wistful “Stargazer,” which if you know anything of Jesse Terry, you likely know that one, and I knew it due to my pash for Dar Williams’ book about urban revival, which I mused about here. Smartest I’d felt in weeks.

Jesse Terry is one of the world’s adorable human beings, and so he is the one to give us all a song that’s about a jellyfish. This is apparently an in-joke related to some other music festival, but as far as I can tell, “Dance In Our Old Shoes” really is saying jellyfish, so if you need a break from songs about fish but feel uncomfortable straying too far from aquatic life forms, here’s the song for you. You can dance to it — I’m thinking swing. Also check out the full 2018 album, Natural, loaded with exciting collaborators including, for reality singing-show fans, the very talented but severely underappreciated Sarah Darling, who went on the ill-fated Rising Star in hope of a career boost (Spotify, Apple Music, Google Play).

At the end of Jesse Terry’s set — which no amount of mud or rain could sway me from, and I appreciate the unintended irony of ending with “Let the Blue Skies Go To Your Head” — I tottered off in search of a warmer wrap than I’d brought, which was mostly an excuse to spend recklessly on a very exciting serape, and also bought an earnest, well-intentioned owl. You can never have enough outer garments or owls.

Warmer and wiser, I found a bench to sit on for Upstate, which is one of those genre-defying bands that other musicians — and your most musichead acquaintance, the one with 800 vinyl albums that he or she croons over, so if that’s you, then I mean you — rave about. This Hudson River Valley septet does amazingly lovely harmonies, as you can hear here with “Going Gone.” There are witticisms beyond my ken in every eighth-note. Their most recent album is 2015’s A Remedy, which will do well by you on a thoughtful Sunday afternoon (Spotify, Apple Music, Google Play). Upstate also got some of the audience on their feet and dancing, which was a huge accomplishment in a situation where “stick in the mud” was a literal description of the seating.

And now… the moment we’ve been waiting for… The Alternate Routes! If you went to shows on the East Coast portion of Nick Fradiani’s fall 2017 tour, you got to see the band as co-headliner, but they didn’t do the West Coast dates. I’d been listening to them for a few months before the tour was announced, as “Safe Haven” had shown up in my Spotify recommendations at the time of its release (I’d missed some earlier major TV placements of songs by not being a heavy TV watcher). So I thought Nick and his tour manager had tremendously brilliant taste in arranging to tour with them, and then wasn’t able to see them myself that year. *sigh*

Their sound is every bit as gorgeous live as recorded. It got people on their feet, starting with the very enthusiastic dance team of mid-size children, though my favorite dance moment was the photographer gal whirling by like a blown leaf, then suddenly pausing to line up a shot.

Where I utterly fail at serious Alternate Routes fandom is that they had playing with them a long-ago band member, so they dipped into their older catalog, and my notes at that point suck. But this means long-time fans get to feel much superior to me, and that can be fun for them.

It was the perfect ending to the night, so I ended it there. Overall, the event was a terrific (if damp) experience that gave me the joy of seeing two bucketlist bands live and introducing me to lots of new music.